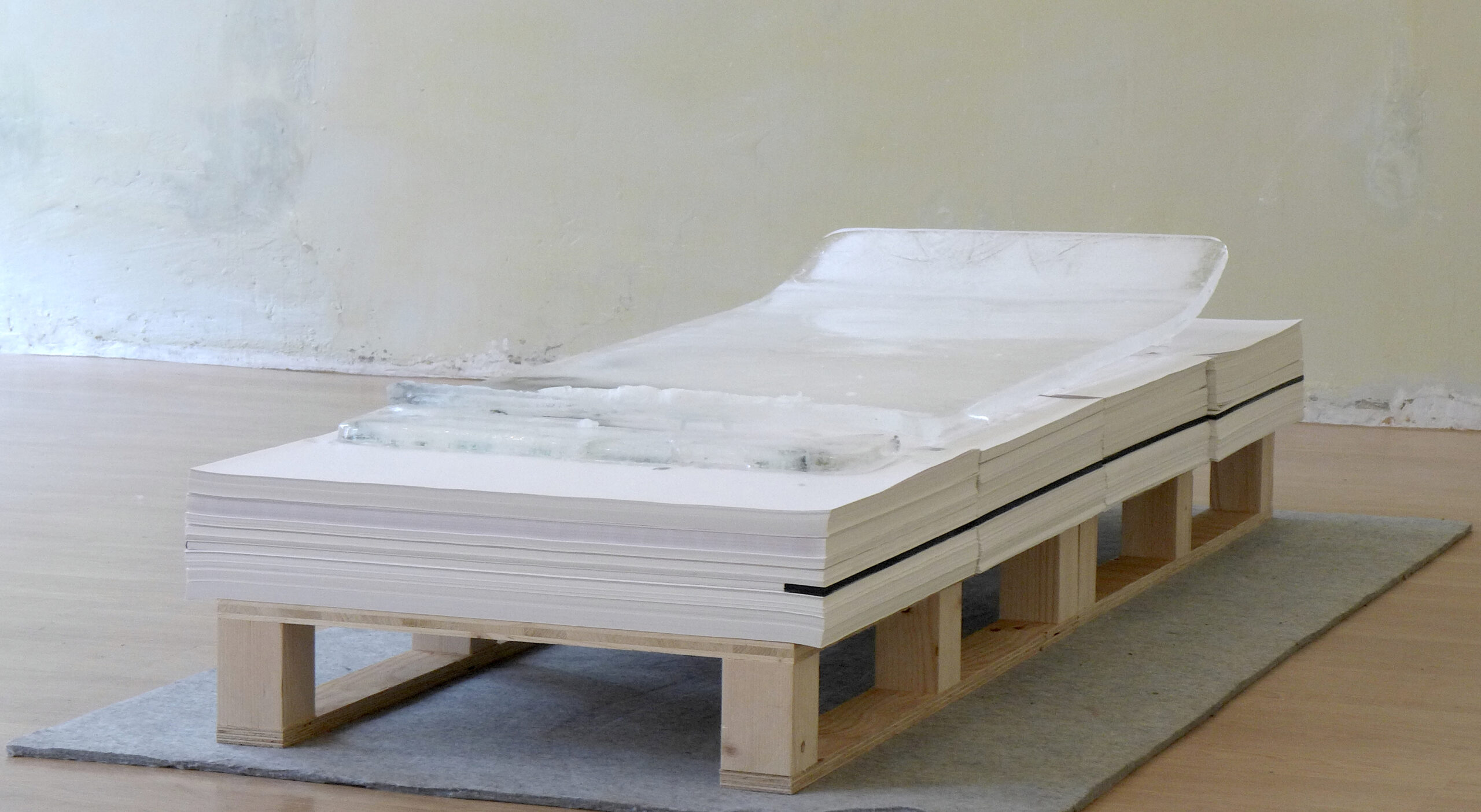 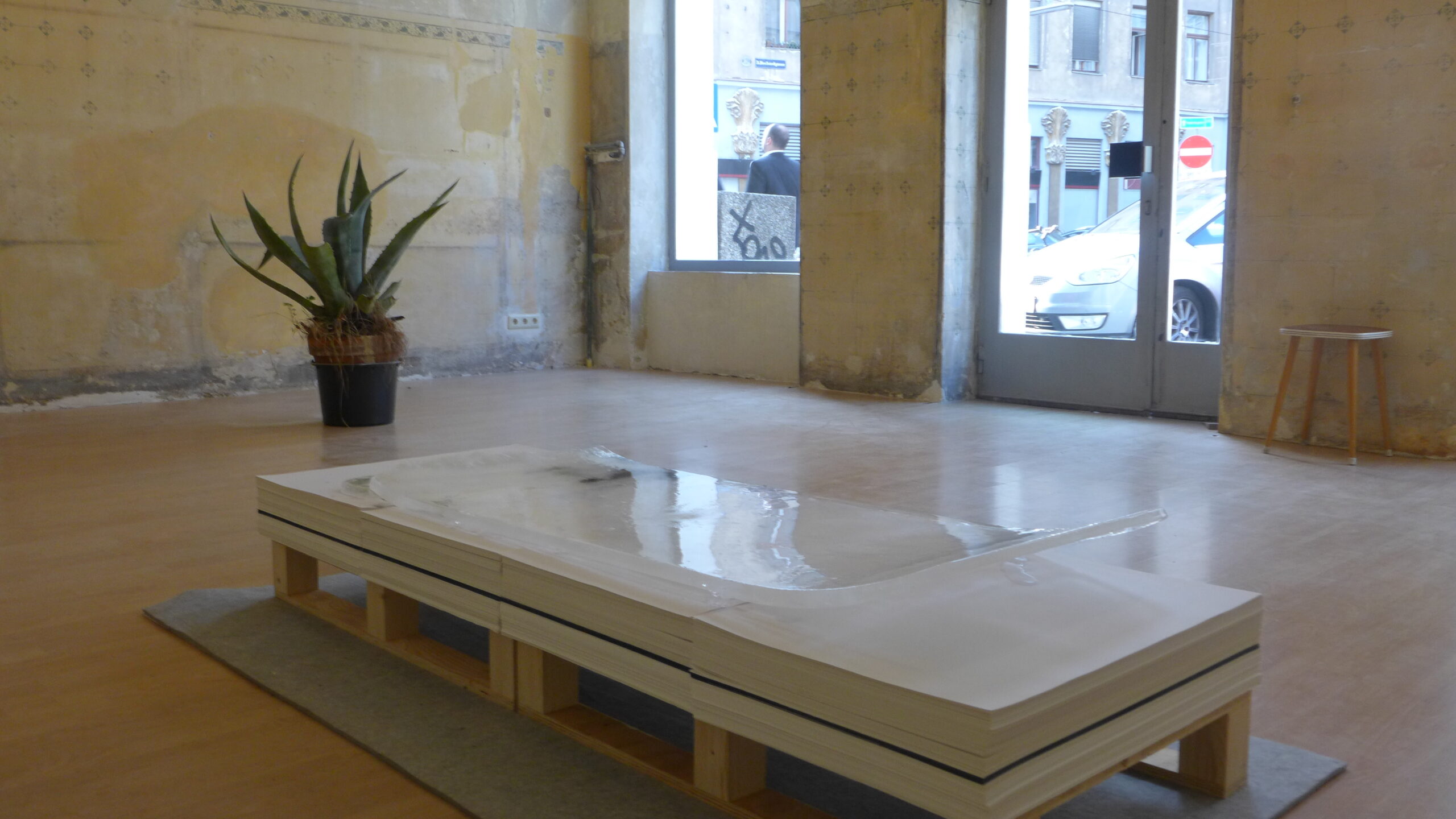 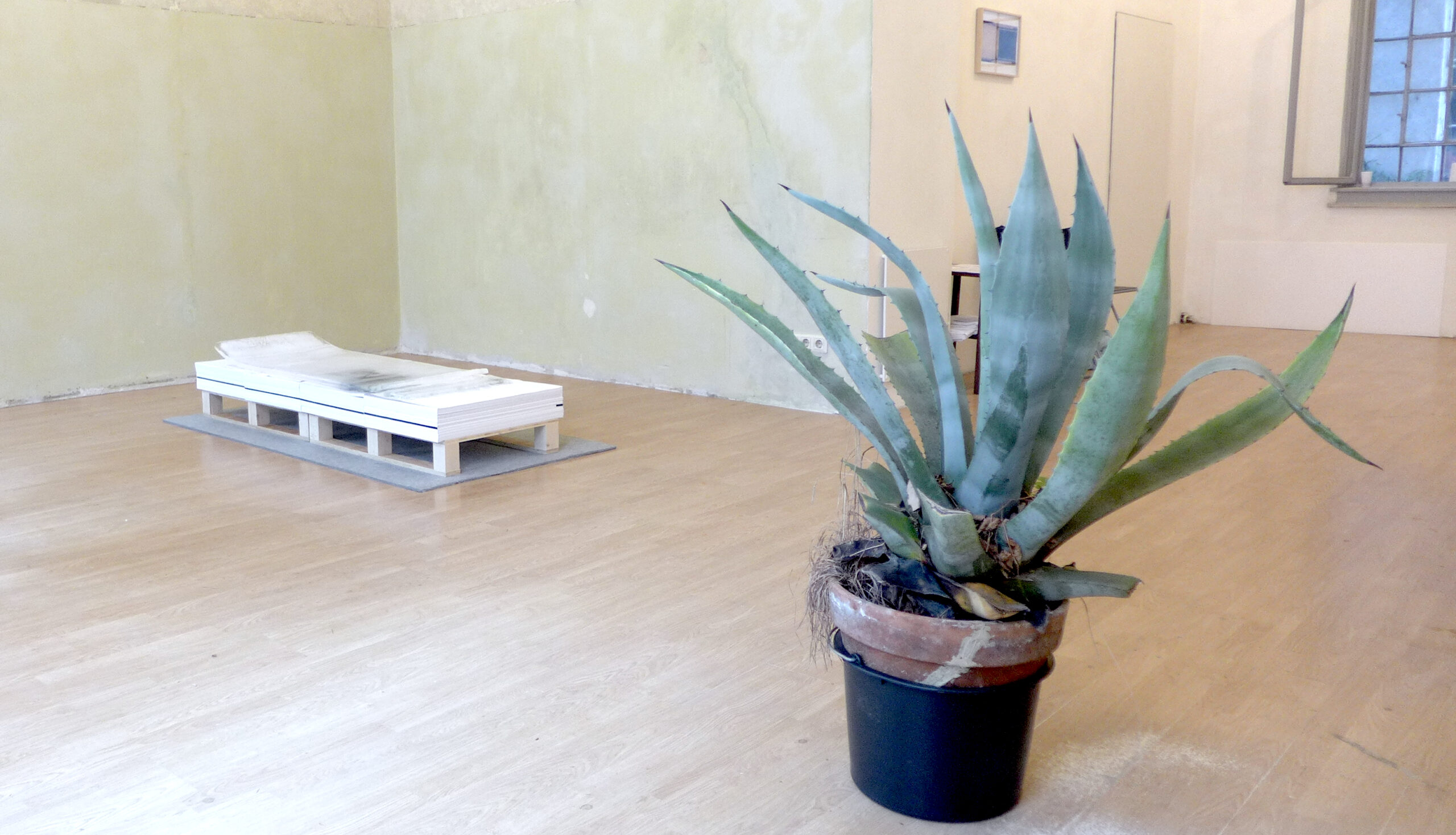 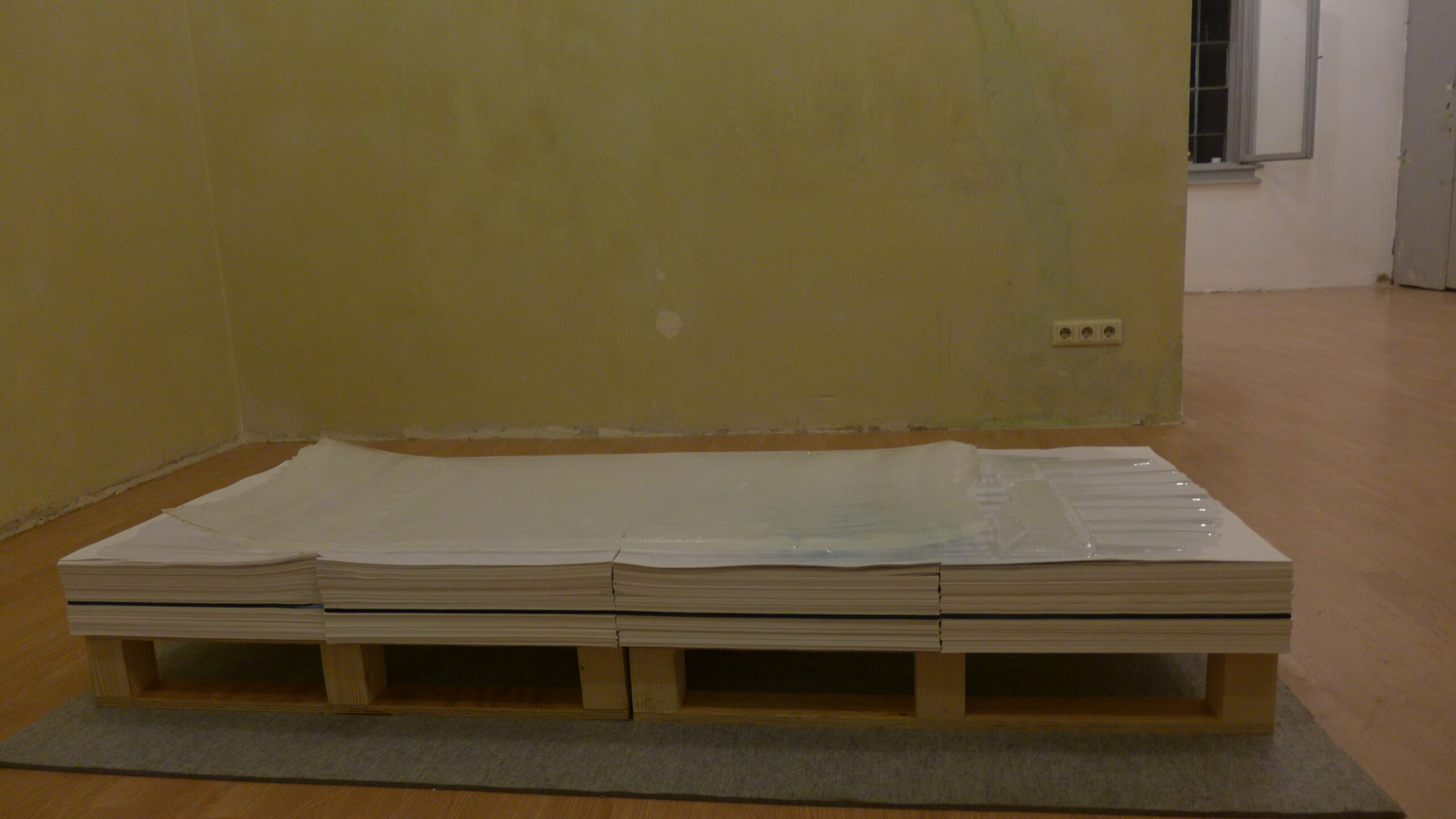 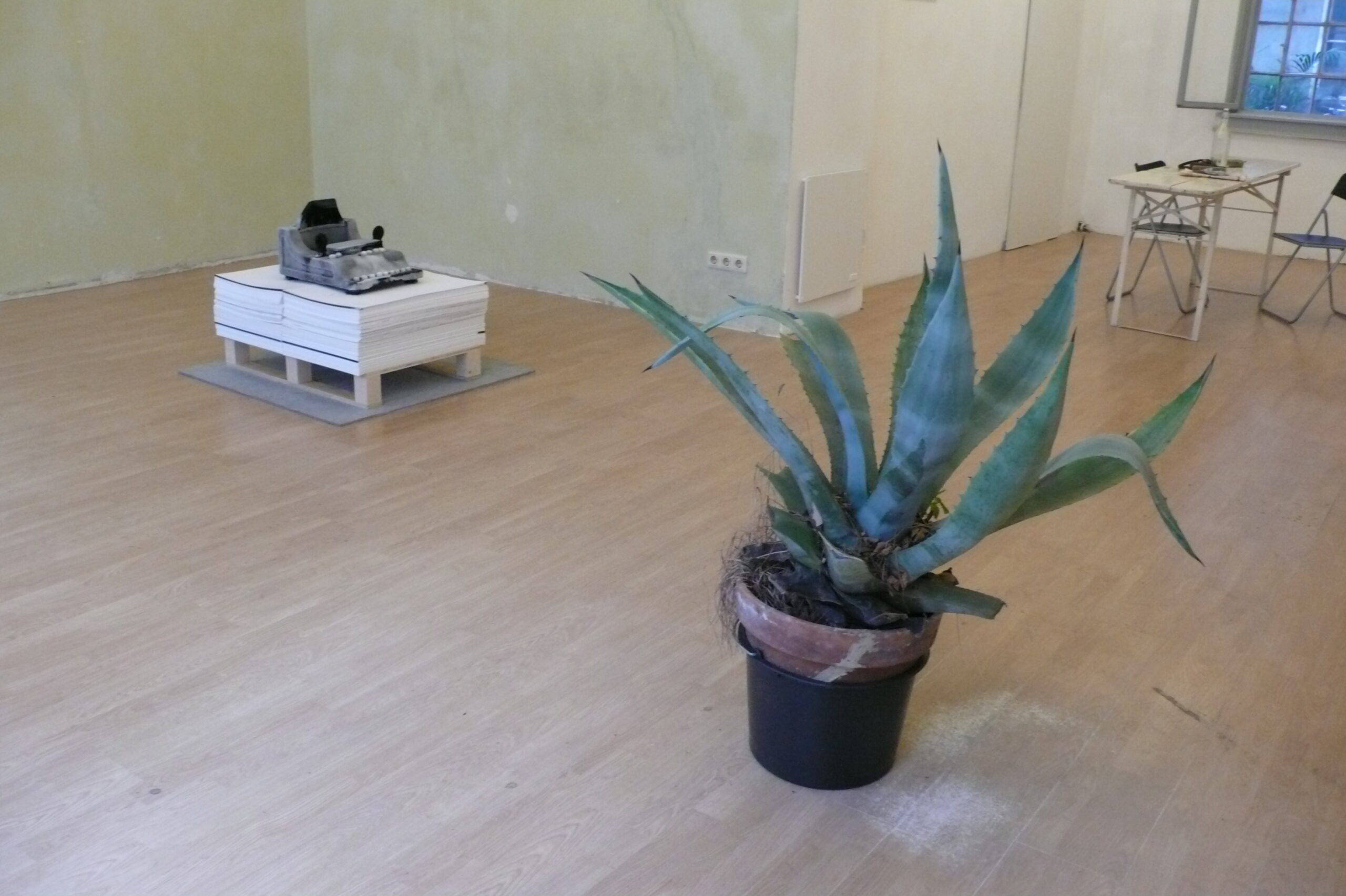 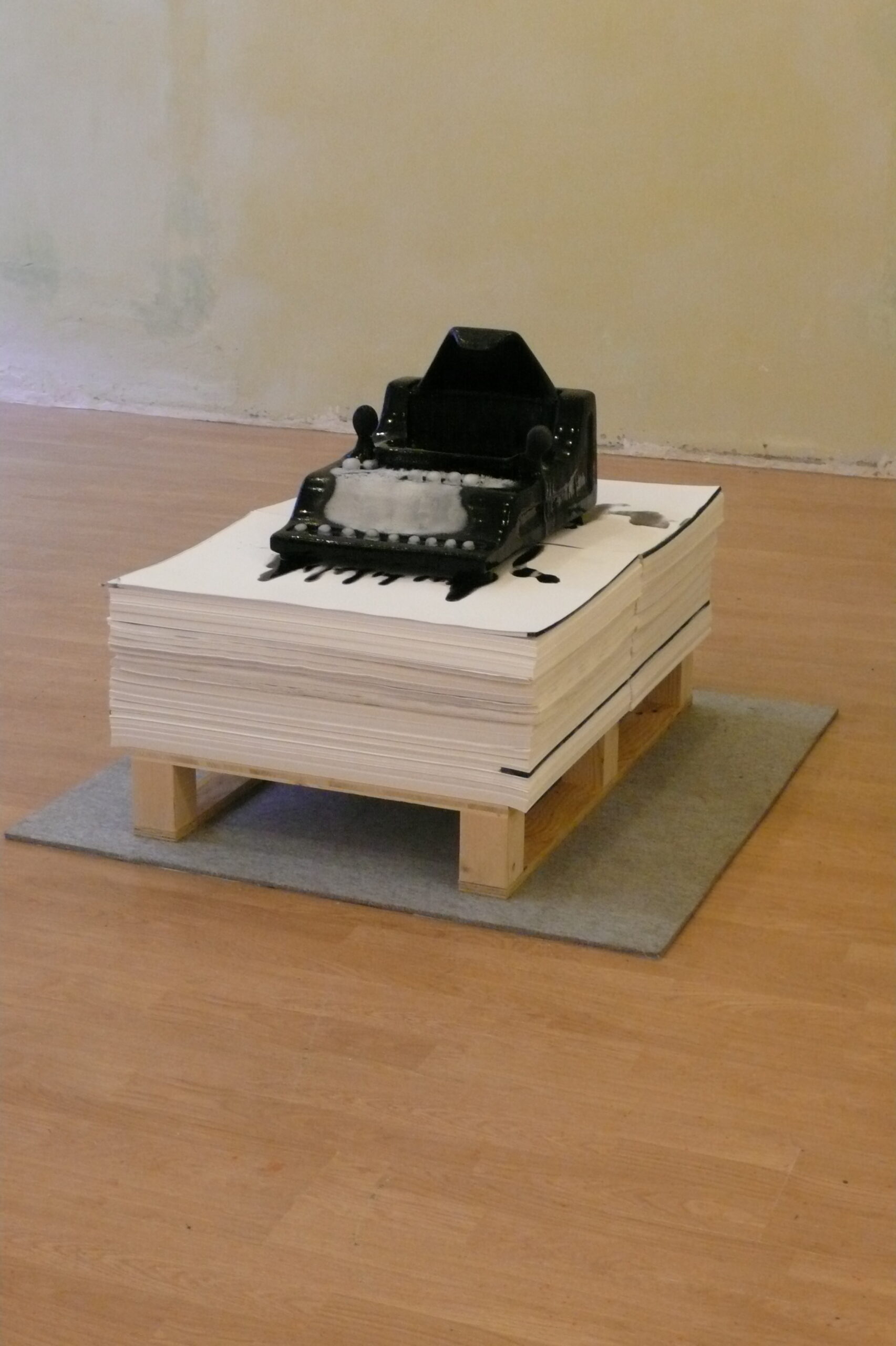 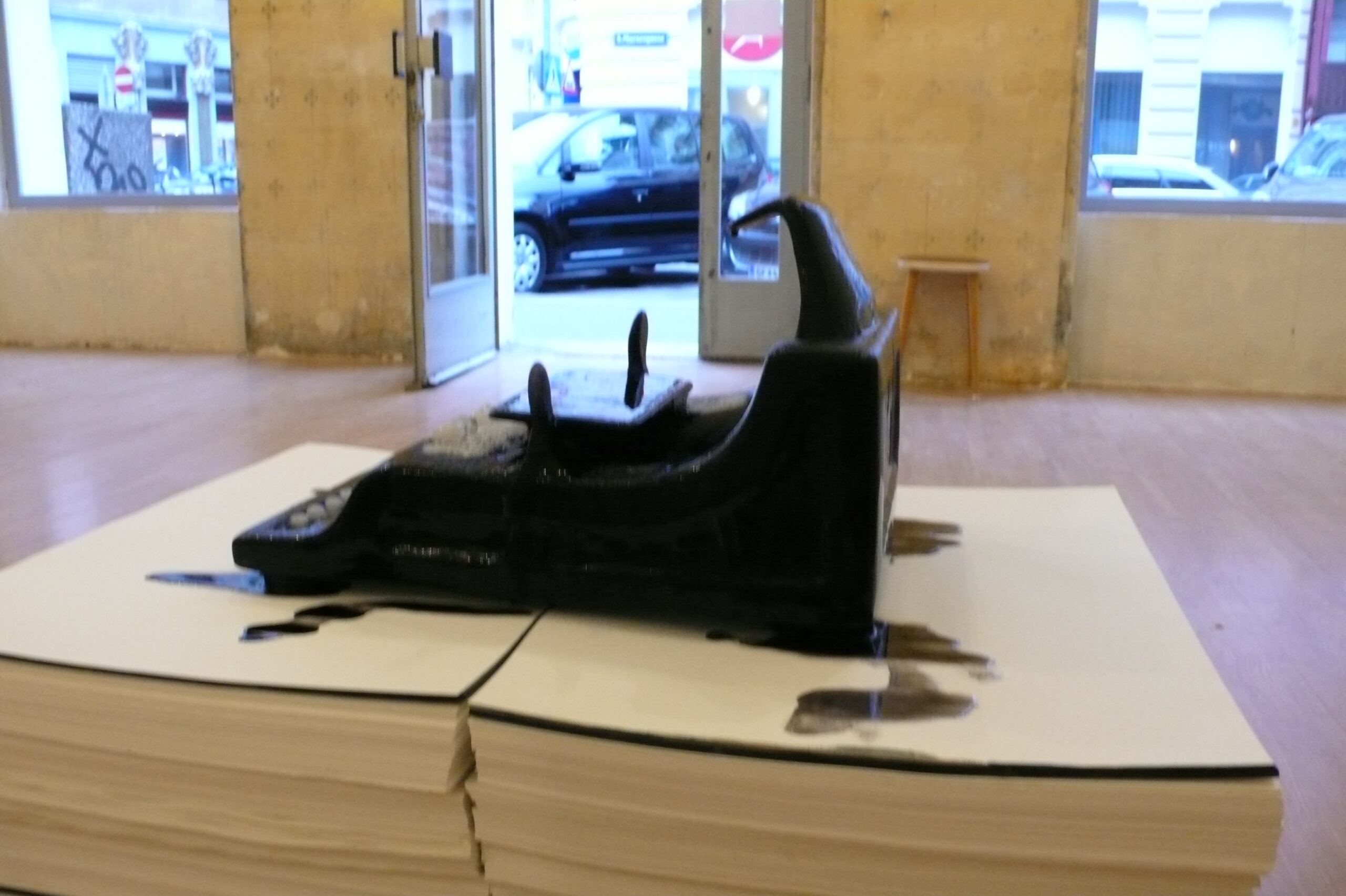 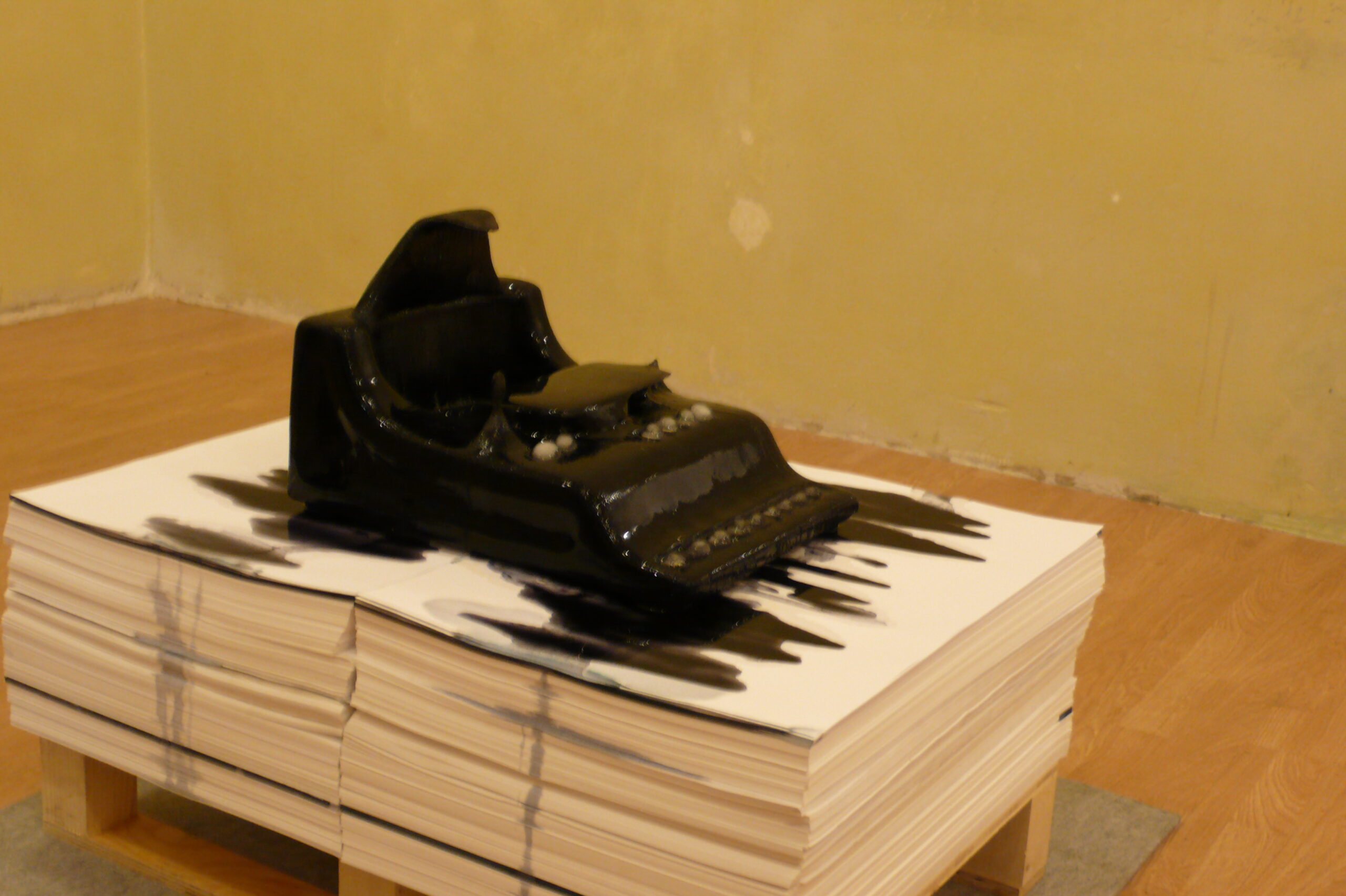 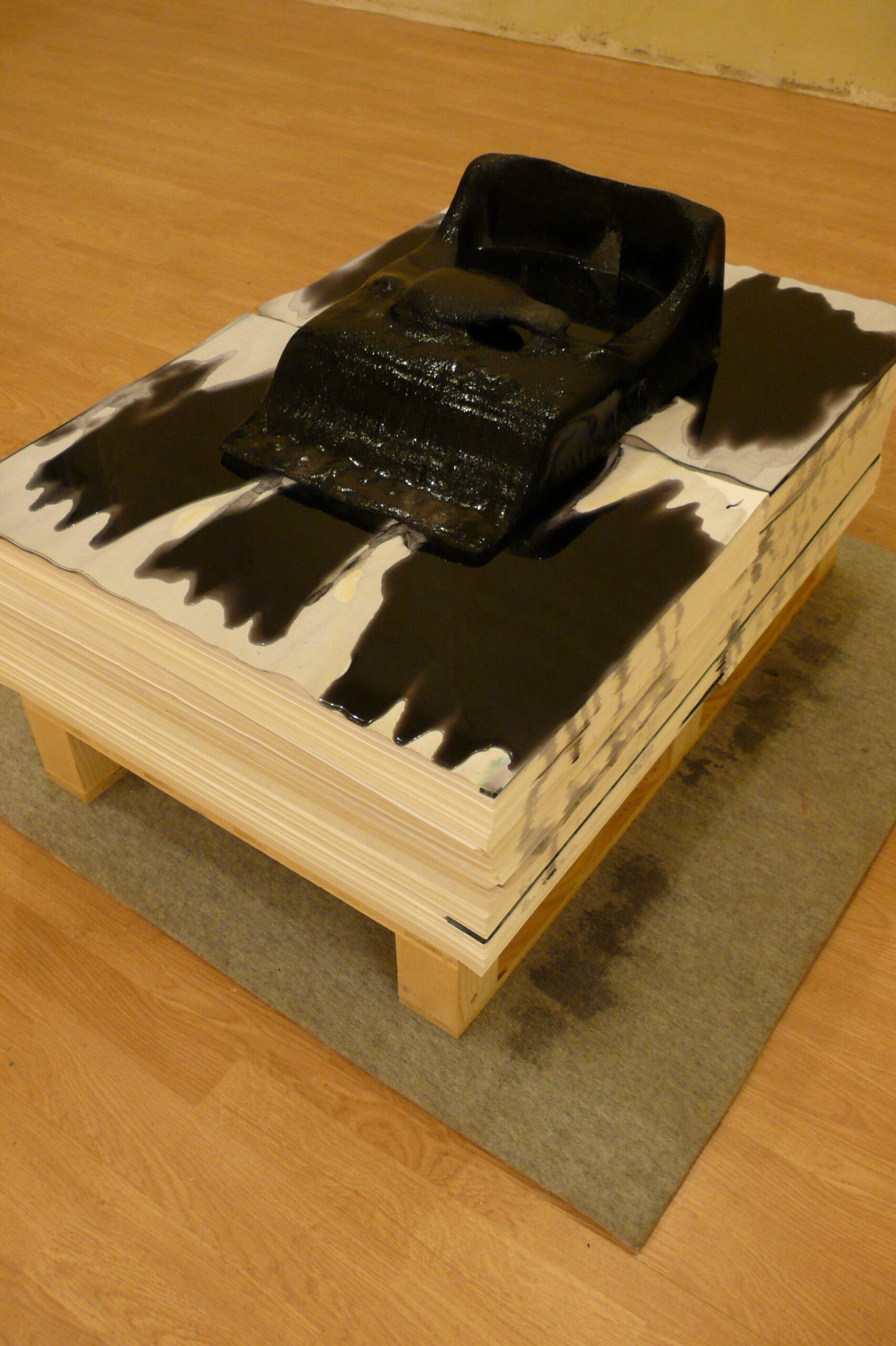 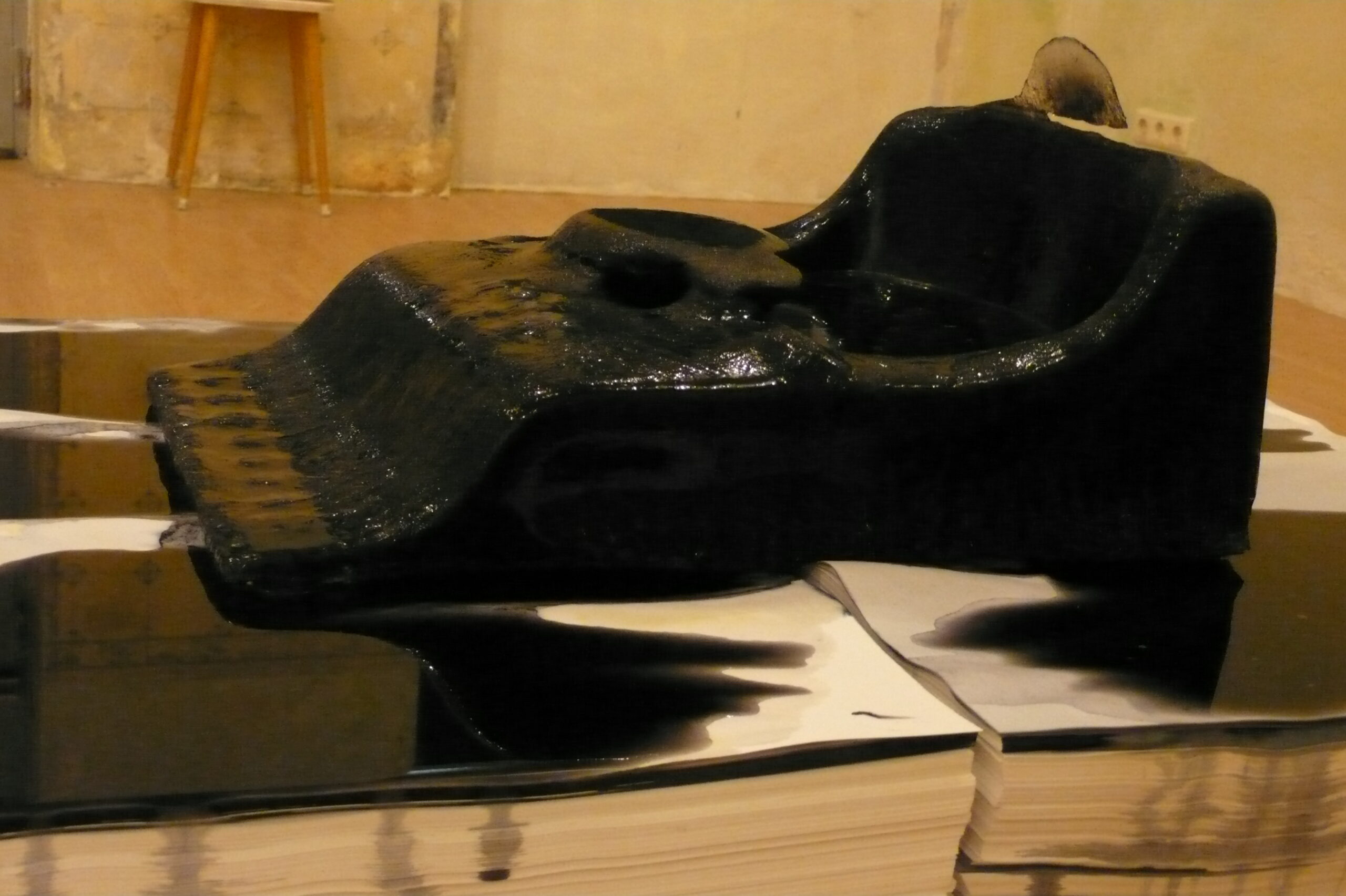 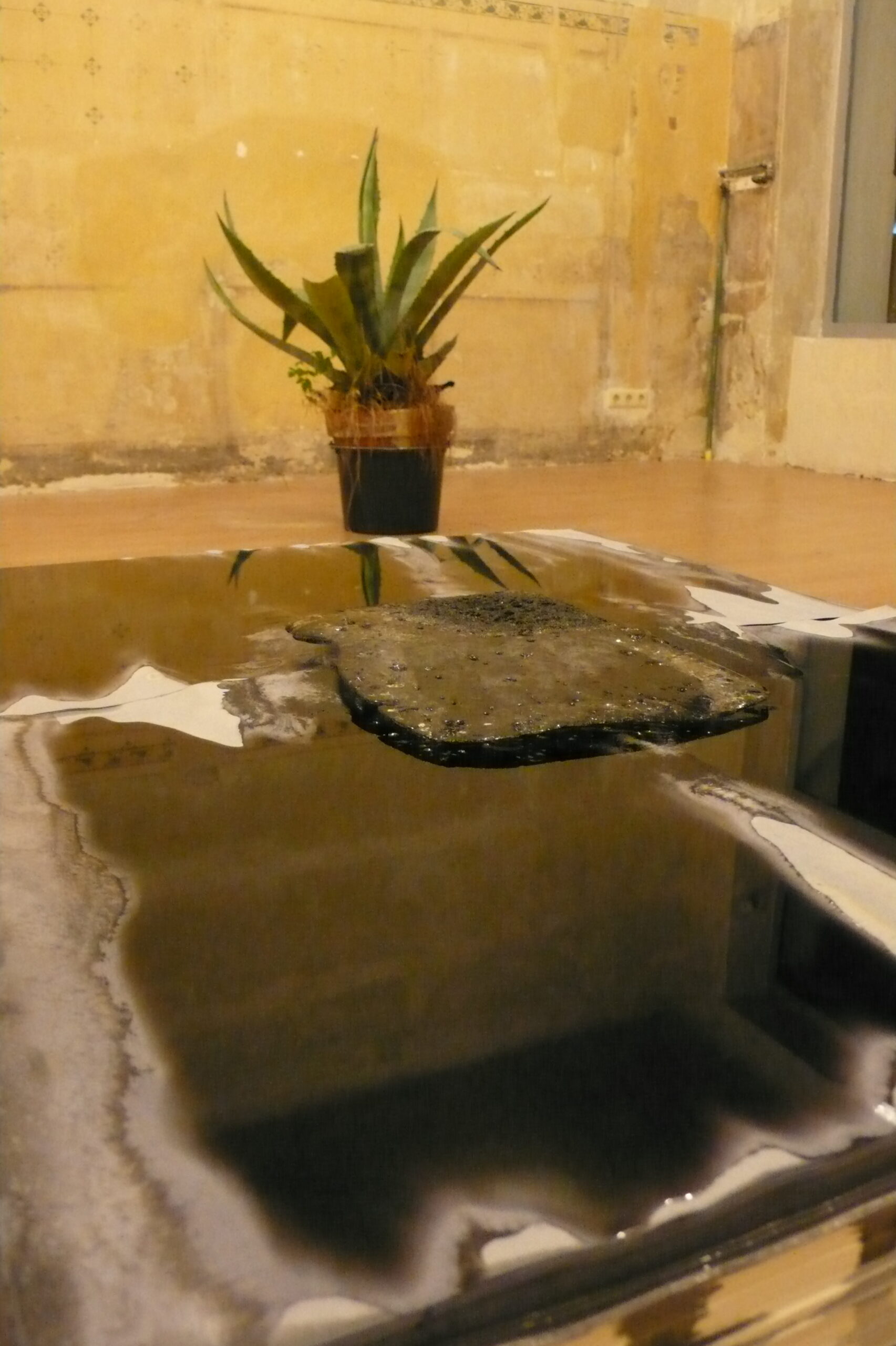 Standing next to seven US-paletts, Wotruba is thinking aloud. He makes a sketch with motor oil. At least there’s enough paper, and the petrol station even has a photocopier. Those from the beginnings are still the best! His plan is bold: Thirty of the records put on ice, among them hits like Rasberry Fields Forever and Wotrubas Erben, will be melted and formed anew. Sure: All water under the bridge. Still: Should the plan work, one could make progress with the new, improvised screen. It‘s a run against time. Somehow, everything is connected and interdependent …
Reisegruppe schöner Männer [Travel Group of Handsome Men] is an experimental set-up – or gesture – in which, just like a composition, Claudia Märzendorfer playfully combines elements that could be the main components of larger groups of works:

Sketches of a Windscreen on Two US-paletts, 2016

Copy of a Copier That Copied Itself, 1991

One may best describe Claudia Märzendorfer‘s artistic practice as an attempt to portray a moment that seems to be out of control, at once impossible and somehow „wrong“. Rather than making works for eternity (and products for the art market), the artist is interested in the processual, the transformation, as well as in a work‘s complete dissolution or disappearance. Thus, „time“ is a subject in all her works, both in ephemeral sculptural installations and in objects, which were produced with a monumental amount of time. For the artist, time is the „only neutral currency“ – an entity that, regardless of background and social status is and remains the exact same measure.
Since the end of the 1990s, Märzendorfer has been developing and working with a technique and material that meets her interest in the volatile and uncontrollable: she produces objects with frozen water (sometimes also frozen ink) – ephemeral, unstable sculptures, whose disintegration begins at the moment of their presentation. These generate unique, magic situations that, like musical live performances always bear an instant of surprise. To go against the grain, take a point of view that is free from being functional or useful is a motor for the artist‘s creativity. Besides the already mentioned ice casts – of, a.o. drying, or rather: dripping laundry (Kaltwäsche, 1997 ff.), records made of ice (Frozen Records, since 2005) or a prototype assembly kit (Als er das Messer in die Sonne warf, 2009) – her oeuvre also includes works that explore spaces by means of photography and drawing. For instance, works from recent years like the wall drawing Wandabwicklung (2014) that spans over 200 m in the BIG headquarters in Vienna, or Entered from the elevator, everything is located on the ground floor (2015). For this, the artist made photographic copies of the working and studio spaces of a complete floor of the University of Applied Arts in Vienna and presented the photos in a poster-size pad: a concentration, or even collapse, of space and time.
Then again, to make the objects from the group of works Ersatzteile [spare parts], it took an absurd amount of time and effort: over the course of eight years, the manufactured truck tyres, engine block and various other parts of a lorry slowly took shape stitch by stitch. The engine block‘s organic tangle of knitted cords, tubes and chambers is reminiscent of viscera that have developed an independent existence. „In principle, my vision is that of an deviation or shift from the „standard situation“: to create a world next or parallel to the world because in most cases I find social guidelines and conventions too restrictive. I‘m often surprised about conformism and believe this is one of our society‘s fundamental problems. I often miss people‘s courage to change or improve situations or the general framework independently.“

(CM in an interview on sustainability, 2014)