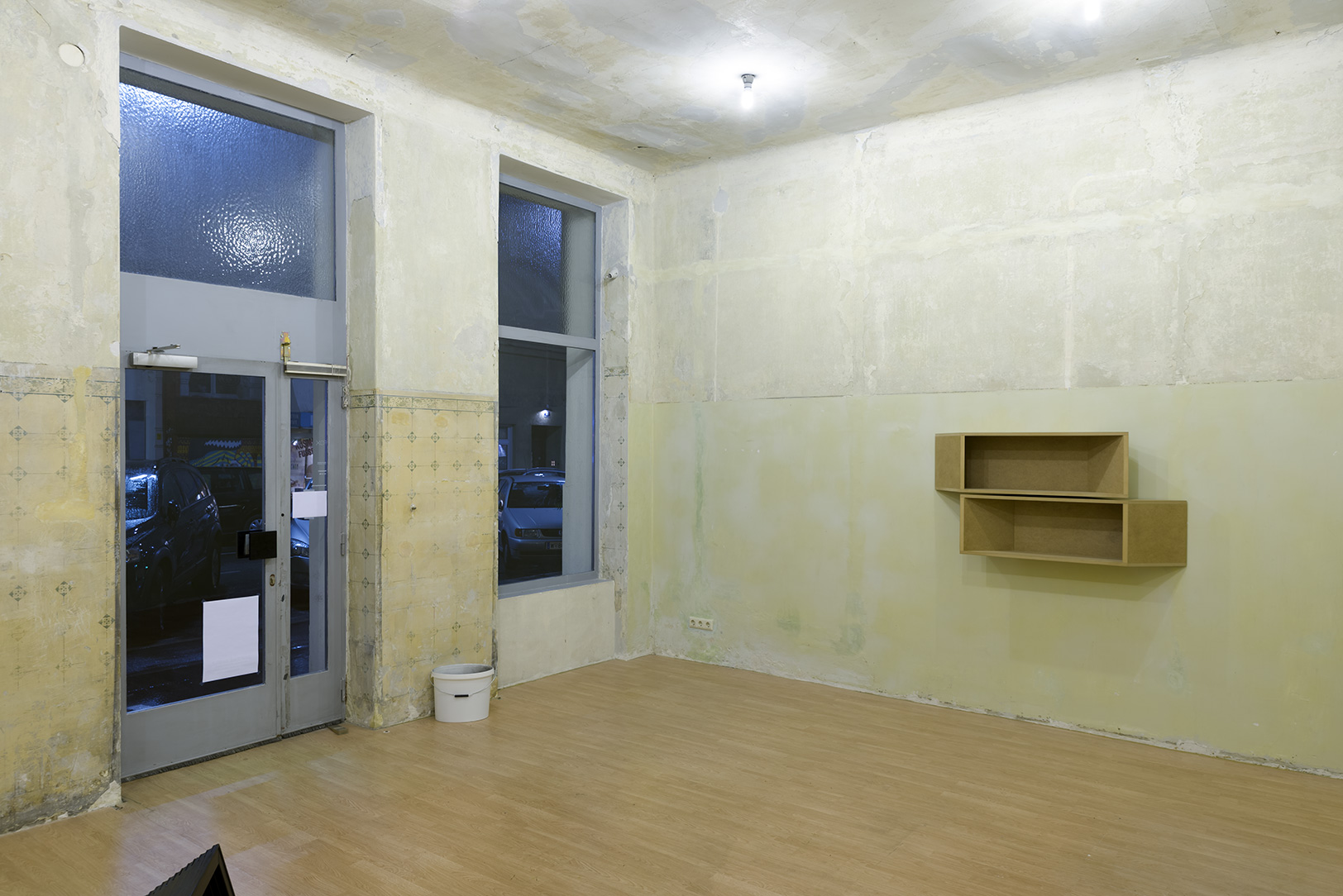 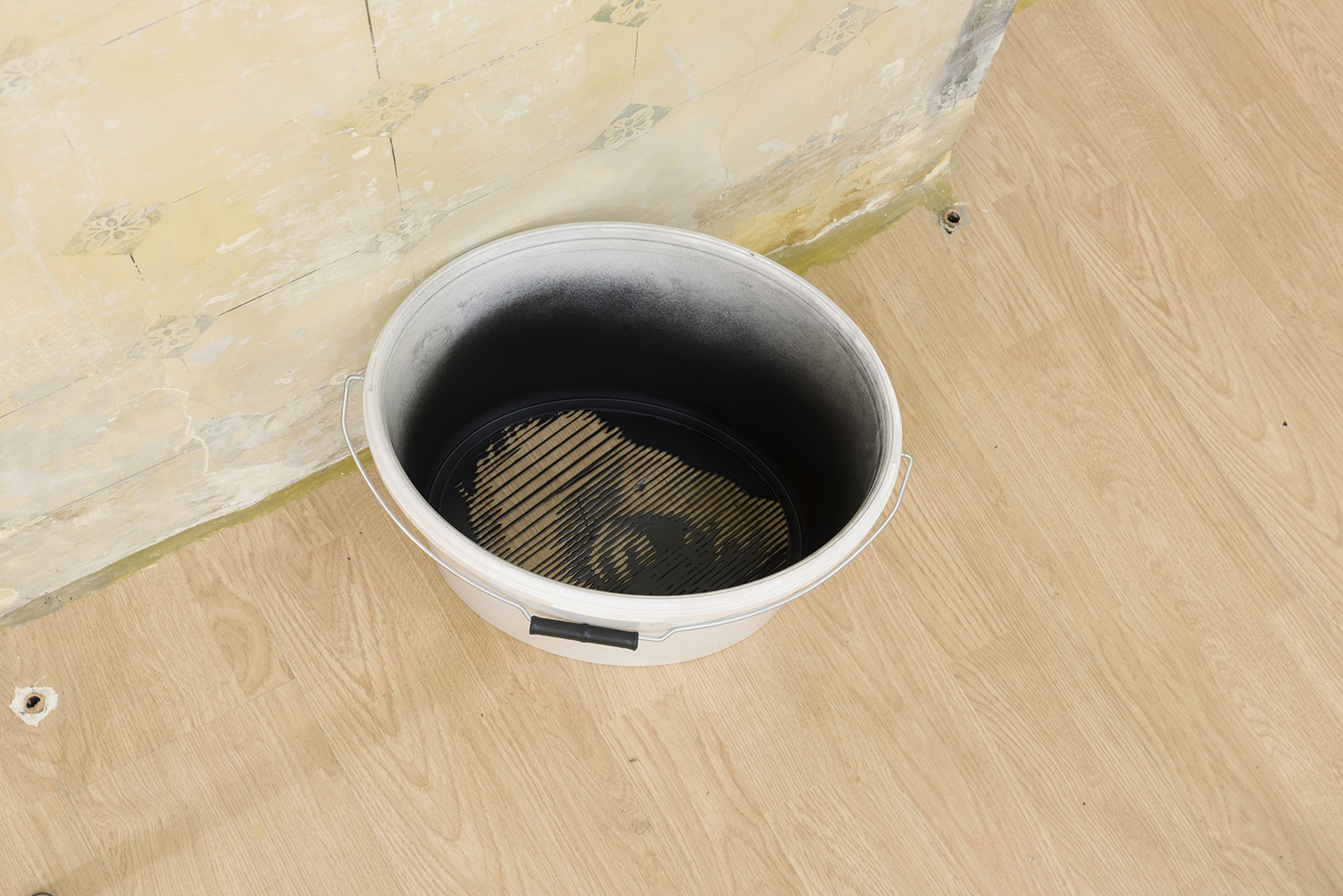 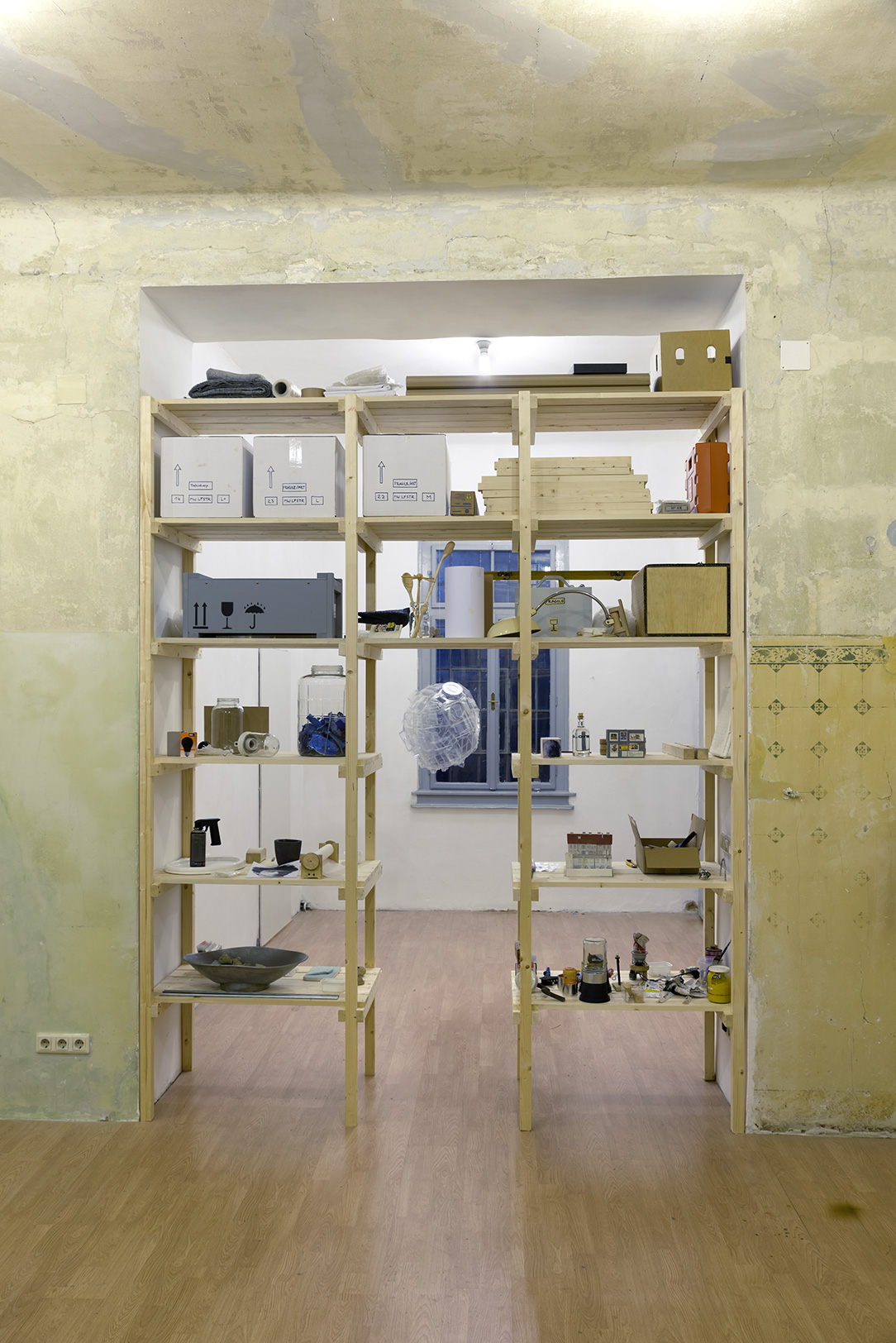 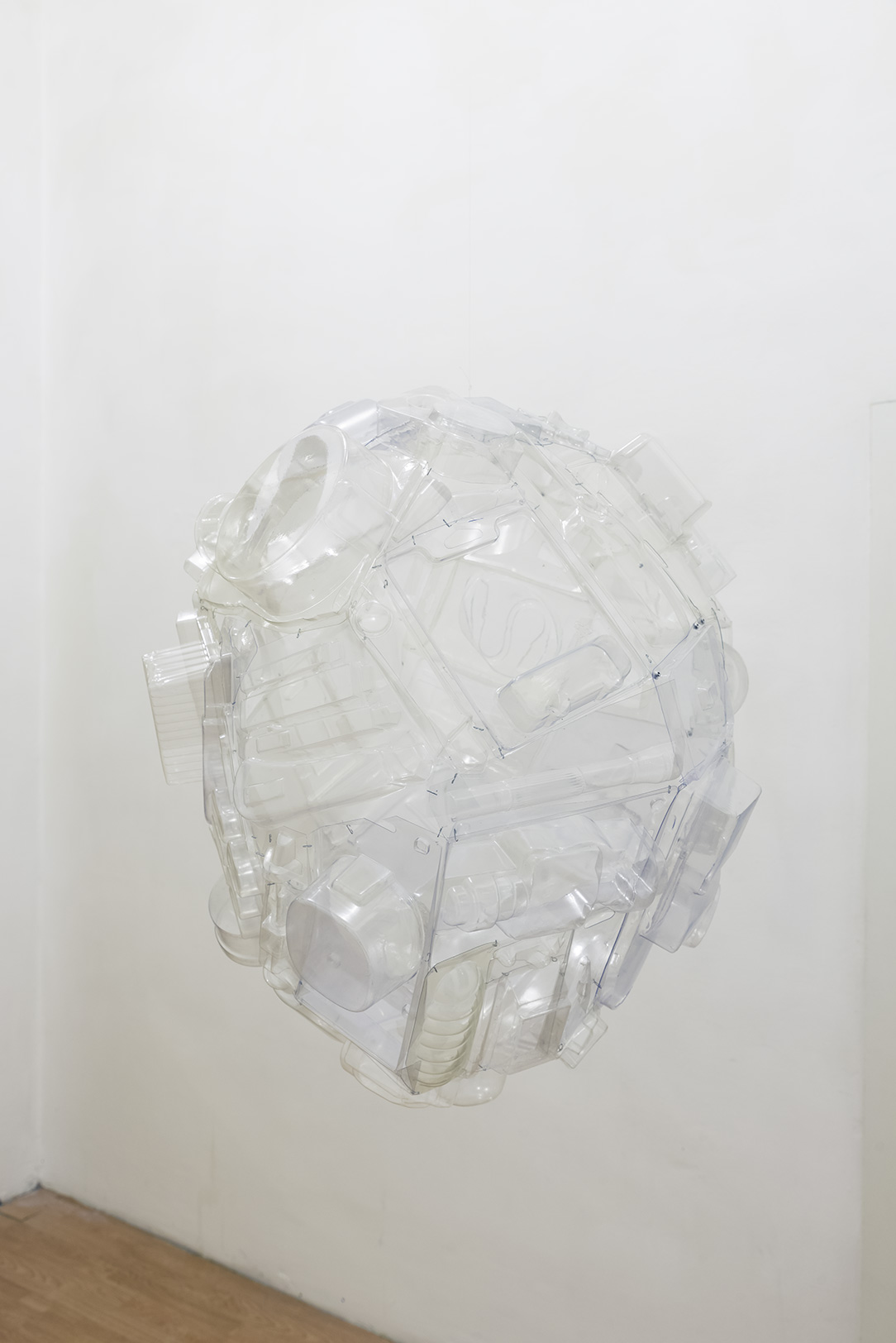 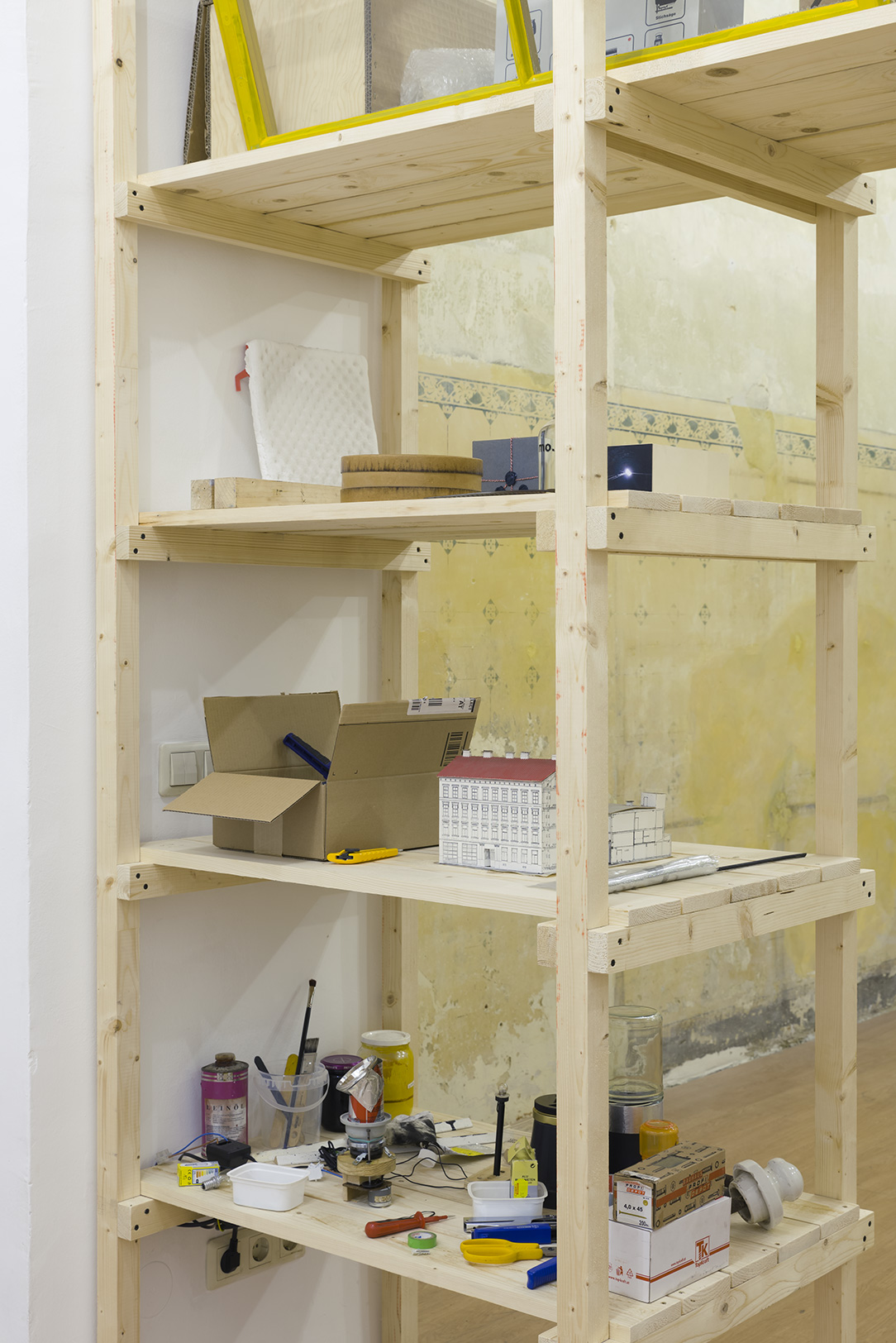 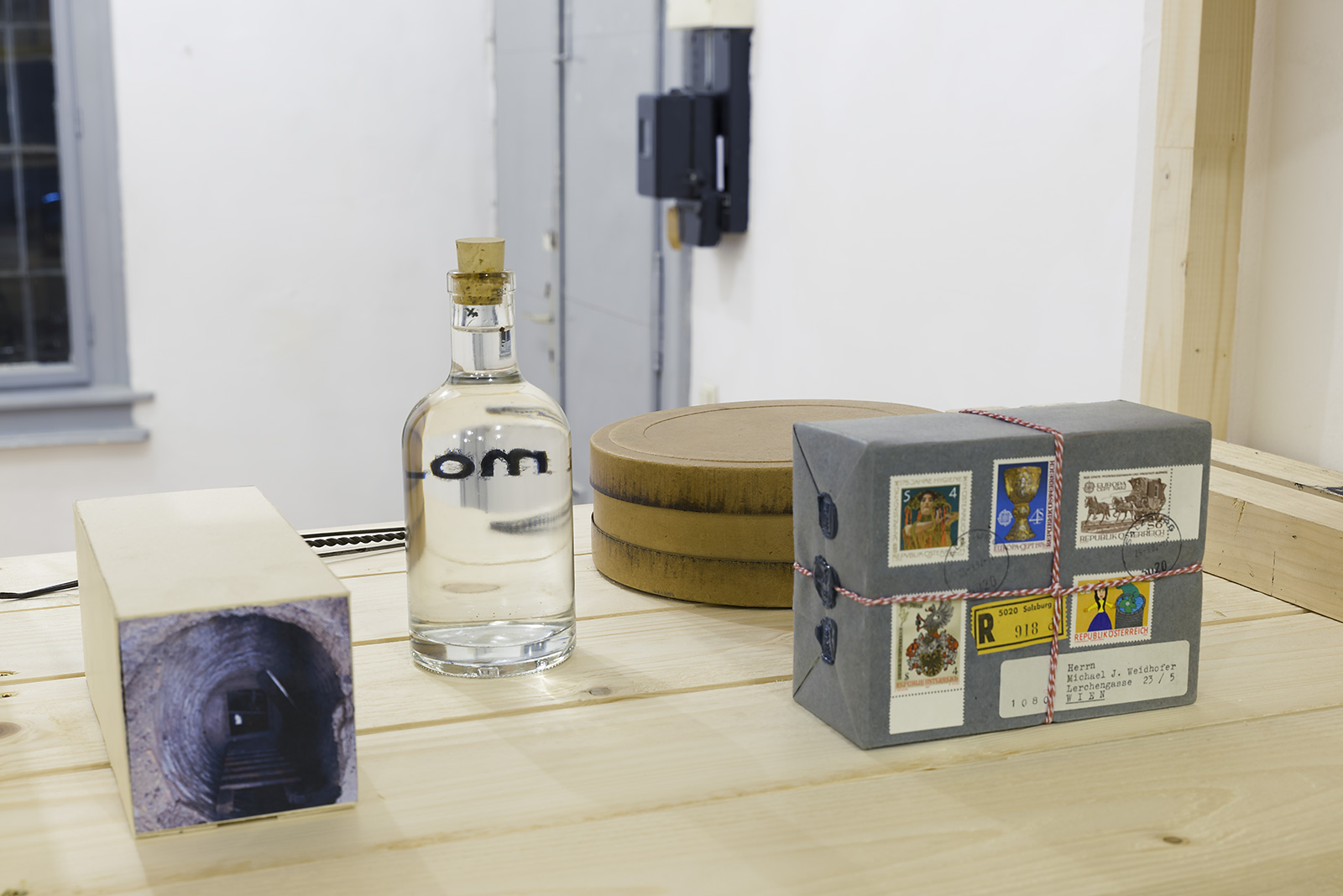 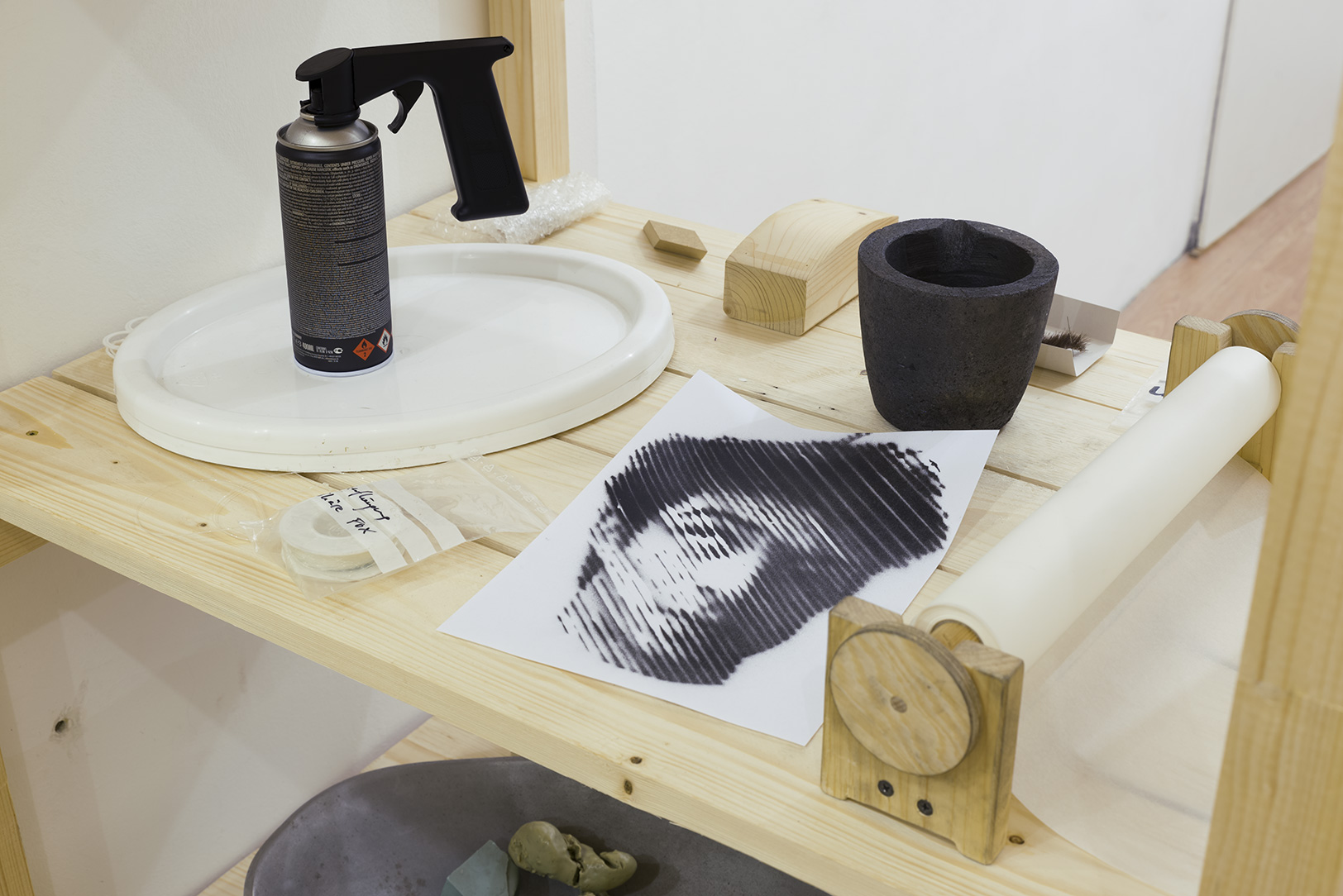 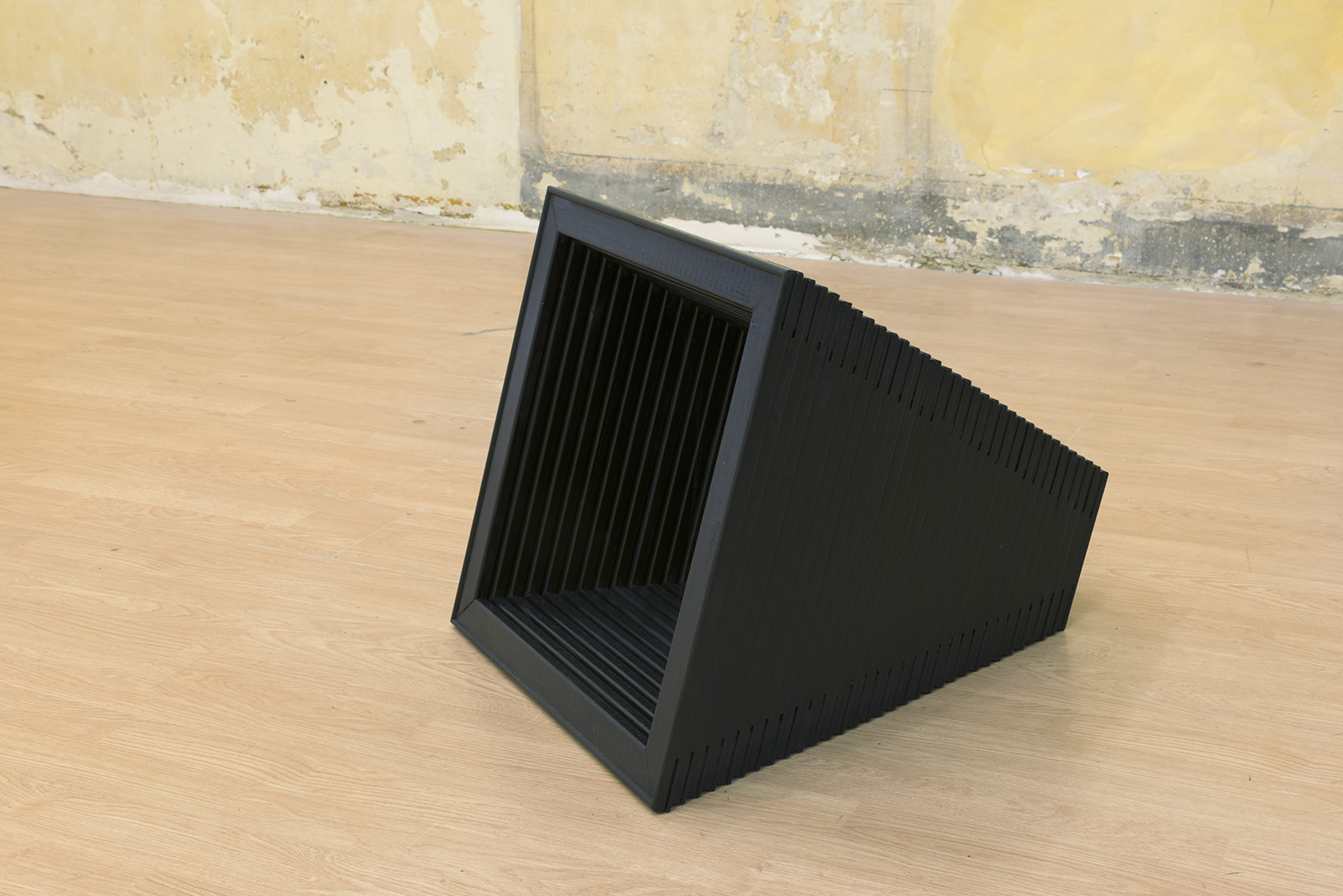 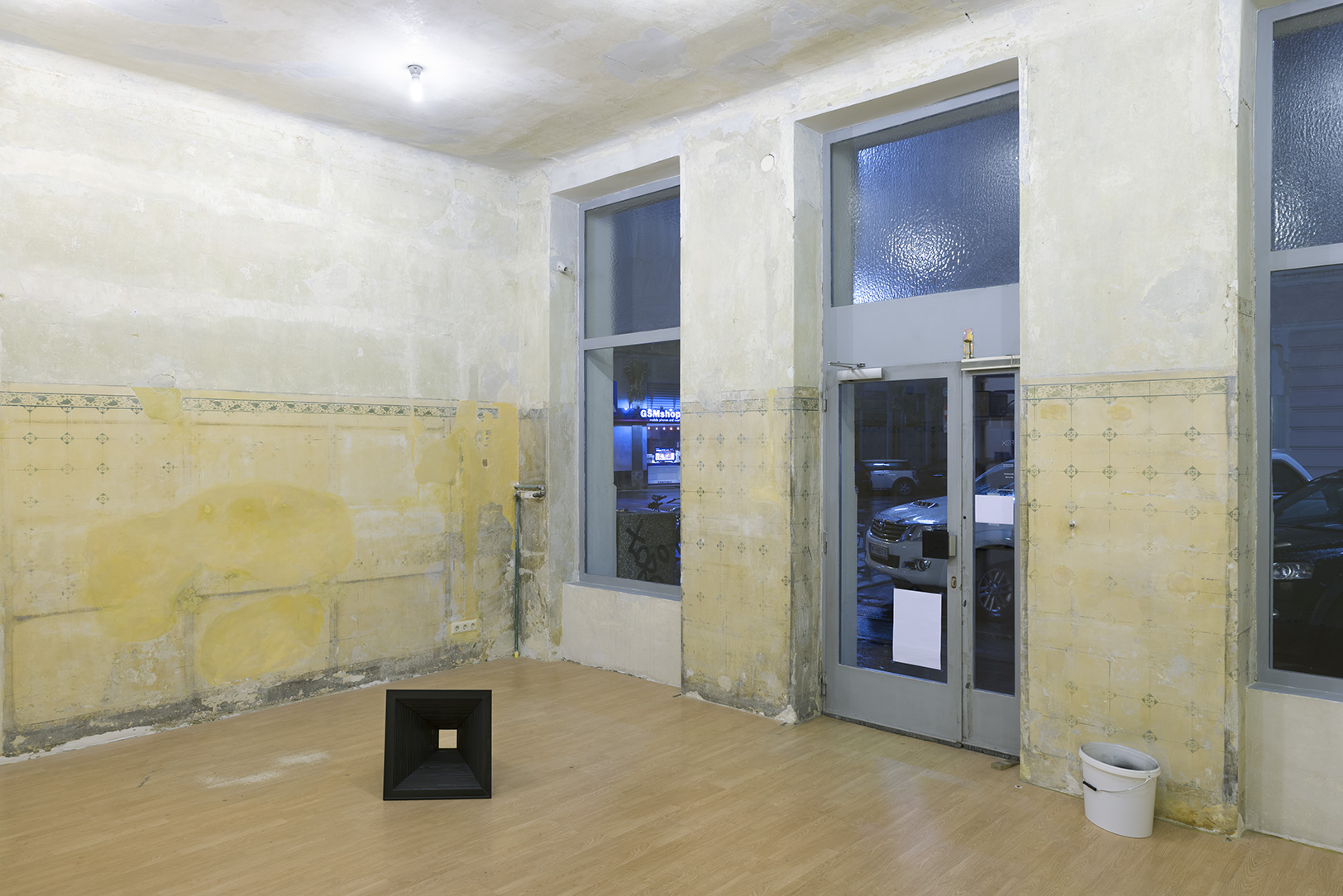 Other spaces.
Michael Weidhofer’s objects and their reference potential

The artistic practice of Michael Weidhofer, who was born in Vienna in 1981, where he still lives and works, can be roughly divided into three categories: (post-) conceptualism, working with space(s), and an object discourse. In his exhibition “Off the Shelf” at the alternative space Fox in Vienna, the artist will mainly present objects. The following text is about these objects and the relation to the rooms / spaces they refer to. It should be pointed out that the (post-)conceptual field in Weidhofer’s work ranges between two poles: There are works for which conceptualism is only one aspect of the work, and others which are more strictly speaking post-conceptual and that focus on working out and operating with concepts. For instance, there’s a parcel in the exhibition that the artist received from his uncle for his first birthday in 1982. It is closed with nine seals and remains unopened to this day. This is always the artist’s most recent work – not because he does something with it, but precisely because he does nothing, leaving the parcel unopened and its contents obscured.
The objects on show at Fox can be summarised under the term of the functional, where functionality varies in terms of structure and quality from object to another. To different degrees, both a sphere made of vacuum formed packaging that is suspended from the ceiling and an object on the floor made of stretcher frames, which are stuck together and painted with oil paint are reminiscent of modernist lamps. Furthermore, the sphere refers to the piece “Medusa’s Head”, and is also faintly evocative of the “Five Moonettes” of US-American artist Chris Burden, who died in 2015 and for numerous reasons is a significant reference for Weidhofer. Besides a fundamentally conceptual approach, both art works are linked, for instance, by a strong interest in practical issues of manufacturing coupled with outstanding technical skills and in steadily opening institutional spaces up to private and public ones. For example the artist cut out his self-portrait in halftone stencil-style from the bottom of a white plastic bucket and used this stencil in public space later. The bucket no longer functioned as container for fluids and paint, while at the same time it gained an artistic function.
Beside these three works, Weidhofer has built and installed a wooden shelf in the space in which by means of selected, designed objects he virtually presents a small retrospective of his artistic practice. This small-scale retrospective is reminiscent, not coincidentally, of Marcel Duchamp’s portable exhibition piece “Boîte-en-valise” [box in a suitcase]. But furthermore, it refers also to the storage as organisational and institutional necessity, whereby Weidhofer does not distinguish between storing works which have been rejected by the art scene and storing, free of reserve, ennobled objects in a museum context. The presentation of tools and material residues in the shelf in turn refers to another space, which in the case of Weidhofer’s working space is not the outpost of a white cube gallery but is reminiscent of the workshop of a small business where (purely) functional objects are frequently carried out as commissioned work. The fact that the shelf will be used again in the artist’s workshop, demonstrates – as well as the two distorted shelves on show – the shelves’ hybrid nature between object, display and pure functionality.
Other objects in the shelf are references to some of the artist’s past projects and the spaces these are linked with. For a project on the grounds of Vienna’s Arsenal, he scanned this and adjacent areas and with the bits and pieces of blue plastics he had found there he copied the mating places (“bowers”) of bowerbirds, which are characteristically often decorated with monochrome litter. The plastic litter is presented in a glass placed in the shelf. From the artist’s flat a toilet window’s casement, which Weidhofer has restored, is exhibited. The majority of objects, however, refer to the premises of the art space mo.ë that is located in a former factory for metal goods in Vienna’s seventeenth district. In 2015, the artist dedicated the large-scale, on site exhibition project “frank” to these premises and their history. A paper model of the building, a chunk of wax from the company’s goldsmiths and a bottle of water from a well in mo.ë’s yard reflect Weidenhofer’s distinct context awareness. He furthermore produced a 85 metre long frottage of the way leading from an apartment in the building to his workshop, which at Fox will be presented in its shipping crate. Finally, his exhibition “Ways in – Ways out”, which allowed visitors to enter and exit mo.ë only through a basement window, is represented in a preview photo.
Weidhofer’s objects not only refer to spaces and projects or, as ready-mades, to the beginnings of real object art and neo-avant-garde appropriations of this concept, however; they also carry great socio-political reference potential. The sphere made of used plastic wrappings refers to the issue of plastic residue and can be considered as an artistic form of recycling. Weidhofer has a strong ecological awareness that is not expressed in actionism or rhetoric, and which can be traced not only this creative gesture but has direct impact on his own lifestyle. Other references relate to the vast and controversially discussed field of social media and their socio-political implications. His stencil self-portrait in a bucket can be regarded as commentary on a present rampant “selfie-mania”. The working warning light that Weidhofer consciously made without a manual as a kind of anti-post-Internet piece refers to the increasingly prevalent alarmist attitude in the media discourse. The object made out of stretcher frames that decrease in size is something of a formal equivalent of the echo chambers and feedback loops of social media, which increasingly present their users only their own preferences (“likes”), concepts and prejudices and set the restriction of one’s own perspective against the initial hopes for an opening up towards the other thanks to social media. These analogies are not imposed on Weidhofer’s work from outside, but indeed correspond with the artist’s intentions.